Let me catch you up:

I'm not quitting my blog. I was blogging before blogging was cool. Life's just been a little busy lately.
I won't even go into work - but just know that it's been a little insane, I'm learning a lot, and learning more and more that accounting is really not my cup of tea.
On top of work - I took on another volunteer project, this time - demolding a house in Pontilly. The place belongs to a really cool, parapalegic guy whose house was about 50 feet from the levee breach in that neighborhood. He evacuated to Dallas, and has all his contractors lined up to work on the house - but none of them would touch it until the mold was taken care of. [Enter Amy and a crew of volunteers/musicians from Philly to New Orleans.]
Philly to New Orleans is this really cool music exchange/ volunteer program. Musicians from Philadelphia come down to New Orleans and play gigs down here at night, and go around to hear all the local bands. Then during the day they volunteer in the rebuilding efforts.
So I spent the week de-molding with The Great Unknown, Throws Like a Girl, and Andrew Lipkey (whose name I cannot spell, and website I cannot find, but who was very talented and noteworthy). Also a couple of bartenders from World Cafe Live in Philly, Andrew Lipkey's wife, and this really cool woman named Gretchen, who helped fundraise back in Philly for the whole project.
I was a little worried the first morning on the job. I picked them up at the bus stop - and they all had their rock-n-roll t-shirts on and cigarettes hanging out of their mouths... But they turned out to be extremely enthusiastic de-molders -- an almost completely unprecedented concept. 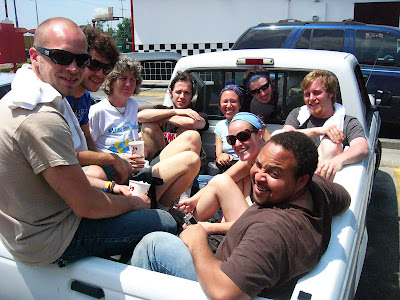 De-molding is one of the most horrible tedious tasks ever invented for volunteers. It involves literally scraping every square inch of a house with wire brushes and power grinders, literally vacuuming every square inch of a house with a shop vac, and literally wiping every square inch of a house with pinesol and shop rags. But they cranked up the 80s music and scraped like champs.
All this to say... I've been sort of busy helping plan this project, carrying it out, and then coughing up my lungs afterwards. I was able to use the respirator filters that folks donated for the gut last month again for this project. On the last day though, a set got so wet (from sweat) we couldn't use them anymore - so I wore an N95 (dust mask). After only 4 hours on that last day without the proper filters - my throat was raw and felt like it was going to close up, and I spent the next two days with the "Katrina cough"* ...Which has now morphed into some sort of ongoing cold.
I am only noting this - to again point out that importance of respirator filters and my extreme gratefulness for that donation.
*For about the first year after the levees broke in New Orleans, everyone in the city was walking around with a chronic cough from all the dust, debris, mold and who-knows-what-else in the air. The clinics and doctors around here just started labelling it the "Katrina cough", and everyone had it, including myself - and several members of my Americorps team back in 2006.
Anyway... I've also been busy with a certain someones TWENTY-SECOND BIRTHDAY! 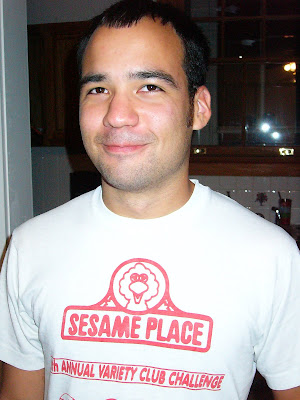 He's gonna hate me for posting this picture, but let this be a warning to the rest of you: Don't date a blogger without expecting your picture and personal business to be spread all over the internet, only to be intercepted by stalkers and murderers.

Since we both have birthdays in May - that means that for 16 days in the year, I am only three years older than my boyfriend instead of four- and ergo, not such a total cradle robber. A funny story... I went to the store to get Anthony's birthday gift - a video game. And found this cool dinosaur birthday sack to put it in. I went to check out, and the cashier, putting two-and-two together, wished me a happy mother's day. ...YIKES.

Overall - I'd say the last few weeks have been good and productive. I feel pretty good about my life here so far. I'm dating a cool guy, have some good friends, I like the people I work with (even if the job is a little straining), and I find time for a volunteer project once a month or so. Life is good.
Posted by everyday amy at 6:51 AM

"I was blogging before blogging was cool."

Remember DiaryLand? I feel like I'm a part of the Amy blog legacy. :-)

I'm glad things are going so well. Would love to hear about your big birthday!

And to quote you again, this time from a comment on my blog: "Blogs are for blogging, Dorcus!"