Another failed attempt at greatness...

So for Choi's birthday, I signed us up for a class on Pasta-making. The boy has an Italian stomach, and a drive to customize almost every experience to meet the most enjoyable specifications. If you know Choi, then you know it's true. This is a guy that would rather walk out of the movie theater, than see a film from a bad seat. And when it comes to food, his passion, he is master of the customized order.

But I digress... Saturday came around, and we were definitely in a lazy, half-dazed, weekend-nap kind of mood. We didn't end up leaving the house until 20 minutes before the class was supposed to start. I think Choi was caught up in a video game and I was napping. Thirty minutes in the car, and a traffic-nightmare Tulane graduation at the super-dome later... we didn't end up making it to the class.

I was pretty bummed, probably more than Choi even, as a lot of my reputation as a cool girlfriend is based on my ability to spoil someone on their birthday. (I really can't take credit for this. Anyone who knows my family - knows that an Allen Christmas, birthday, or other commemoration, MUST be blown into titanic proportions of celebratory fun. In fact, I would say, I am a much tamer version of my parents in this respect.)

So today, dinner rolls around. I'm hungry, bored and still riding on a residual wave of disappointment... I decided to rally. I told myself, 'Amy - You're from the internet generation. You don't need a class! The world is at your fingertips.' I googled a recipe for homemade pasta (surprisingly simple by the way) and went to work. 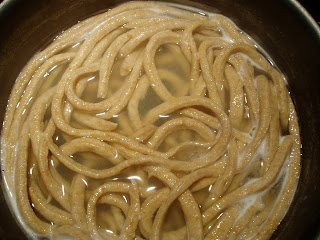 You may not be able to judge from this photo, but my noodles are gigantically proportioned.  They have the diameter of a human finger.  I wasn't brave enough to taste one... I bet if you bit one chaulky flour would spill out, like a sad, pasta pixy stick.
Anyway - I managed to multiply my initial failure, and rack up two pasta-related disasters in one weekend.  I guess some things (especially things dealing with doughs), still do require a little face-to-face explanation.
...Which somehow I find comforting.

Aw, pasta strikes again! Just this last week I ran across a picture of you holding tupperware brimming with too much spaghetti. I'm sorry about your pasta pixy sticks, but I love that you've still got the touch! How are you?